Most times when people think of the clitoris they think of a small little pea that sort of exposes itself when excited. But the truth is the clitoris is shaped like a wishbone. Just like a penis, the clitoris has its own hood, glans, shaft, and extended up to 10 times in size beneath what is visible to the human eye.  According to Masters and Johnson the average clitoris size is being between 1.5 and 5.5 milliliters when aroused. Is is recited in volume by the way. When aroused, the clitoris more than DOUBLES in volume! 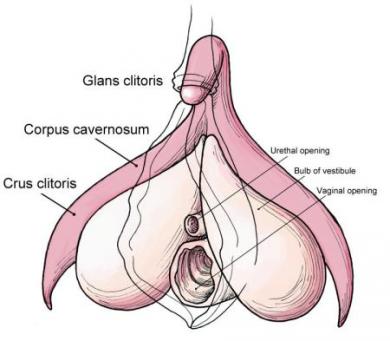 Women whose clitorises are on the smaller side of the scale report have fewer orgasms than women with larger clitorises.

So if you are having a hard time reaching an orgasm through penetration it might actually be related to the size of your clitoris.

If you suspect that your clitoris is smaller than average and you’re having a hard time reaching orgasm, one thing you can try is stimulating your interior clitoris.

Another option is using a Pussy Pump. It completely covers the vulva and when pump it adds additional circulation so that the clitoris grows in size.

The last thing you can use is a micro mini bullet which can stimulate in between the folds of the labia.

Sometimes you have to experiment with different methods. By focusing on the part of the clitoris that you CAN’T see, you are actually increasing your chances of having more powerful mind blowing orgasms.

Be the first to know the latest blog posts, deals, style updates & more